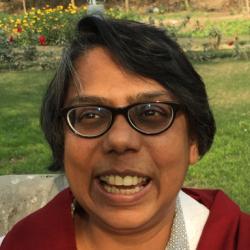 Ruchira is a trustee of The Listen Charity and has campaigned for over 30 years to demand a world in which no human being is bought or sold. She is a journalist, social justice activist, feminist campaigner, visiting professor at New York University, Distinguished Scholar at University of California, Berkley and Founder of the Indian anti-sex trafficking organization, Apne Aap Women Worldwide. She spends her time between Forbesgang in Bihar, Kolkata, New Delhi, India and New York, USA. Among her numerous awards are an Emmy for Outstanding Investigative Journalism, the Clinton Global Citizen Award for grassroots activism, the prestigious French award l’Ordre national du Mérite (Knight of the National Order of Merit), Doctorate in Humane Letters, Smith College and the UN NGO CSW Woman of Distinction Award. She has successfully advocated for the creation of the Trafficking Fund for Survivors at the United Nations and the passage of US Trafficking Victim Protection Act. She has edited two anthologies-River of Flesh & Other Stories: The Prostituted Woman in Indian Short Fiction and As if Women Matter: The Essential Gloria Steinem Reader.