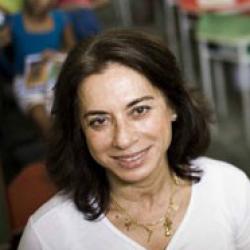 Yvonne is a trustee of The Listen Charity and a well-known Brazilian social activist. Yvonne founded the Uere Project in Rio de Janeiro, a differentiated school in one of the largest slum complexes of the city which takes in hundreds of traumatised children and adolescents with cognitive and emotional blocks due to constant exposure to trauma and violence. Previously Yvonne worked for years with children in conflict zones in Africa, and has developed a methodology (“Uere-Mello Pedagogy”) which integrates neuroscience with didactics to heal the children’s trauma and integrate them back into the education system and help them progress in life.

The Uere Project was born out of a school she set up for the survivors of a massacre of eight street children by the police in 1993. After being kidnapped twice because she knew who the killers were, Yvonne managed to bring about the first trial in Brazil with the police as the defendant. In 1999 she became a member of the International Human Rights Tribunal and again had the opportunity to visit various African countries and deepen her analysis on children in contact with or victims of violence. Yvonne is currently at the helm of the Uere Project and, with 30 years of research and direct experience in the slums of Rio and abroad, she keeps adapting and developing her methodology with the aim of disseminating it throughout Brazil and the world. The Uere-Mello Pedagogy is being used in more than 250 schools in Brazil and has been recognised by UNICEF as one of six strategies for children at risk.