Guitar Legends was a five-night global broadcast event that took place in the Spanish city of Seville in October 1991, shown on worldwide television and starring perhaps the biggest array of top guitarists ever assembled.

The event was conceived and produced by top British impresario and producer Tony Hollingsworth.  It was held to promote the idea of Seville as a entertainment destination and thereby help draw support for the world fair, Expo ’92, due to be held in the city the following April.

Tony Hollingsworthconceived the idea for the event, which also included a televised documentary, with no specific occasion in mind.  He then approached Spanish state television RTVE, with the suggestion that it should be the major co-producer, and it agreed.

“We got all the way through the negotiations, the contracts were drawn up and both sets of lawyers agreed the terms.  Then we all went to the RTVE boardroom for the signing ceremony.  We waited for RTVE’s director-general [Pilar Miro Romero] to come for the signing, which would take place in front of the press and photographers.  She didn’t turn up.  Her officials made several phone calls and finally learned she’d been called to the prime minister’s office.  We waited for two hours and then learned she’d been sacked.  So there was no deal.”

Over the following weeks Tony Hollingsworth wondered whether he could find another organisation to take on the idea, particularly in Spain, a natural home for a guitar event, and one that had already shown interest, albeit aborted.  Fortune was with him.

Several people who had worked at RTVE had started work for the government organisation set up to run Expo ’92, including the former head of finance whom he had dealt with at the television station.  Hollingsworth wrote to him suggesting that Guitar Legends should take part in Expo ’92 and got a letter back from Chris Fisher, who had been seconded from the Burson-Marsteller public-relations company to run their campaigning team.

All the public talk about the fair had been about the planned buildings and a new transport network, and this had created an image of the city as a civil engineering project rather than a place to go for entertainment.  As a result, very few people had shown any interesting in going to the fair.  “Guitar Legends could solve our problem,” Fisher told Hollingsworth.  “But we need you to put on the show six months before we open our doors.  If you could run a commercial campaign into it – encouraging people to buy tickets – it could do the trick for us.”

Tony Hollingsworthaccepted – but wanted to know whether the stadium for the event would be ready in time.  Fisher came back the next day: “Not exactly finished but good enough for you.”

The organisers put up half the $7.2 million cost of the event, leaving Hollingsworth to get the rest, which he did from selling the television rights.  In Spain, he sold the rights to RTVE, but not for cash.  The television station told him that it had run out of money – though, as a state television company, it would not go bankrupt.  He suggested they provide broadcasting facilities, but the organisation couldn’t do that either.  “So, what can you give me?” he asked.  It offered airtime – television and advertising spots that he could sell on to other companies.  The value covered the rest of the costs.

Hollingsworth agreed – the first time he had become involved in a television bartering deal, a common-enough practice in the USA and in some other countries.  Bartering is not allowed in the UK, though there are probably ways round the regulations.  As Hollingsworth puts it, “you go in one door at a British channel and ‘sell’ them the programme.  Then you go in another door and book advertising spots to the value of the money you’ve, in theory, just been given.  In effect, it’s barter.”

Though he was new to the practice, Tony Hollingsworth decided to do much more with the airtime than simply sell it on.  He built up an “integrated sponsorship package” to offer Coca-Cola.  This consisted of RTVE’s television and radio advertising spots, but also corporate hospitality, a supply of tickets to give away and a series of promotions.  Coca-Cola accepted, offering him good money.  “I realised that if you package all these things together you can get four times as much as you can get for just selling each of the rights seperately.”  In the UK, the event was broadcast by BBC2.

The show:Each of the five concerts, from October 15 to 19, was devoted to a different musical style – Blues, jazz/fusion, Conceptual, Rock and Heavy Rock.  Hollingsworth appointed a music director for four of the nights – Brian May, George Duke, Dave Edmonds and Phil Manzanera, giving each an understanding of the featured guitarists he would approach.

All the concerts were sold out, with 6,000 people attending each night. Spanish newspaper El Mundo said that the five concerts “converted Seville into the world capital of music”.  Entertainment Weekly described them as “unlike anything the world has ever seen or heard.”  The shows “gave the stage to virtually every six-string virtuoso extant”.  Some moments “approached the legendary”.

Each night’s concert was greeted with huge enthusiasm by the audience – and the artists appeared to have enjoyed the concerts just as much.  After each of the first four nights, says Hollingsworth, several asked for their flights home to be changed so they could stay to watch the following night’s performances.

Hollingsworth said that the guitarist who was paid the most “respect” was Les Paul, a pioneer in the development of the solid-body electric guitar, which is regarded as having made the sounds of rock and roll possible.  He was 76 when he appeared at Seville on one of his rare performances outside New York, where he still played in a club every Tuesday.  According to Hollingsworth, “his hands were already severely affected by arthritis but he played beautifully, but slowly”.

“In rehearsals he had had one request.  He wanted to have a really long lead on his guitar so he could walk on stage already plugged in ‘like the heavy metal rock stars’.  When he came off stage he was crying and said to me ‘I didn’t know anyone outside of the US even remembered me.’”  Hollingsworth’s parents, who remembered Les Paul’s early hits with his wife Mary Ford, were backstage.  “Les was the only guitarist my mother wanted to be introduced to.”

One of the highlights of the concerts for Hollingsworth was a duet between Paco de Lucia and John McLaughlin.  Entertainment Weekly magazine thought the most moving moments were during the tributes – “Keith Richards, in skintight jeans and leather jacket, whiskey in hand, dedicating Going Down to Freddy King, or John McLaughlin performing In a Silent Way in memory of Miles Davis…In these moments of eulogy rather than in the celebratory jams onstage, the event approached the legendary.”

There was praise elsewhere for Brian May, lead guitarist of Queen, who hosted the last night and played a number of Queen hits with several top guests.  During the evening, he loosely formed an early version of what was to become The Brian May Band a year later.

There was little praise for the black-clad Bob Dylan, described by Entertainment Weekly as “the week’s biggest disappointment…scowling and wandering the stage in a fog.”   According to Hollingsworth, Dylan was too stoned to perform well.  He arrived later than we asked and was able only to do a short rehearsal with Keith Richards and Richard Thompson.  “Keith was strong enough to lead and let Bob follow.  But Richard Thompson tried to follow Bob, who meandered hopelessly through his songs.”

Joe Walsh, the former Eagles front man, came on stage in an equally bad state, but managed much better.  “It was the most surprising moment of the five nights,” says Hollingsworth.  “He was stoned and drunk backstage and I was in two minds whether to try to get him onstage or cut his part.  In the end, we propped him up at the side of the stage and pushed him on.  As soon as he got into the lights he was transformed.  He took control of the audience and the other musicians and led.  It was a wonderful performance.  As soon as he got offstage he fell down.”

As another commentator put it, “no whiskey in the world can stop Joe from singing Amazing Grace… and not many in the world could sing it and play it that well.  His adrenaline starts flowing strong again and Rocky Mountain Way comes out so spontaneously.”

Guitar Legends took place at the La Cartuja Auditorium just outside Seville.  Five 90-minute shows and a one-hour documentary were broadcast, with 45 countries showing live shows.  Thirty countries showed a second broadcast.  Four hours of the event were broadcast on radio in 105 countries. 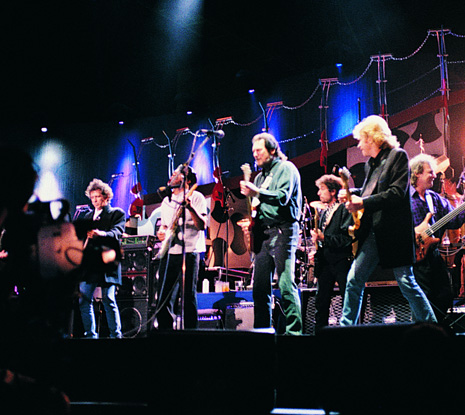 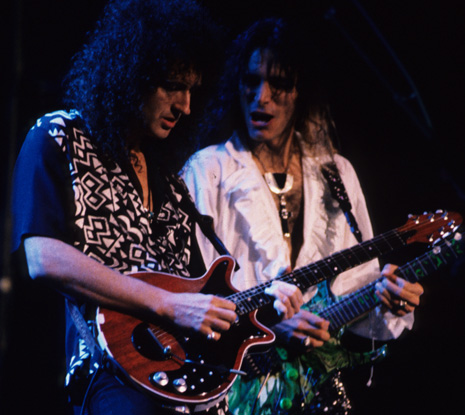