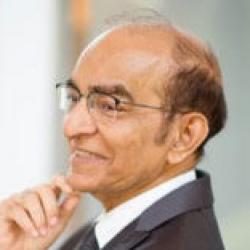 Abdul is an advisor to the Listen Campaign and has over five decades of high level experience in international campaigning, political affairs and diplomacy. He is still the convenor of The South Centre in Geneva and from 2011 to 2015 was South Africa’s permanent Ambassador to the UN based in Geneva. Previously he was Deputy Director General of Foreign Affairs in South Africa, Member of the UN Secretary General’s Advisory Board on Disarmament and from 1995 to 2011 South African Governor on the Board of Governors of the International Atomic Energy Agency. In 1959 he was one of the founders of the British Anti-Apartheid Movement and remained its Honorary Secretary from 1962-1994.

Abdul has written extensively on Southern Africa for the United Nations, participated in UN hearings, given evidence to the UN Security Council and advised on overall policy issues when South Africa hosted UNCTAD in 1996, the Non-Aligned Movement Summit in 1998. He holds a Masters Degree in International Relations from University College London, is a Visiting Research Fellow at the School of Oriental and African Studies part of the University of London  and Patron of the Trevor Huddleston Memorial Centre, Sophiatown, Johannesburg.